skip to main | skip to sidebar

And now for something completely different....

Although we have many beautiful, or at least interesting churches on Staten Island, one thing about the Catholic landscape here that has always fascinated me has been the large number of independent Catholic institutions sprinkled throughout the island. By "independent", I mean to say that they are not churches, their raison d'etre is something other than housing public worship, and they are not connected to any one parish, as are the Catholic schools. I refer to seminaries, convents, religious orders, shrines, retreat houses, charities, etc. Often housed in architecturally fascinating buildings, they've always had an air of mystery about them, existing as they do, away from the public gaze. I am going to pictorially document some of these institutions here, as they might be of interest to both locals and out-of-towners as a historical testament to Staten Island's once pervasive Catholic culture. Also, at the rate we're going, it might not be long before some of them are knocked down by condo developers, converted into group homes for the city or otherwise sold off by the diocese, so we'd better record their existence while we still can.

The first place we're going to visit is Alba House at 2187 Victory Blvd. It is a major Catholic publishing house run by the Society of St. Paul. The members of this order are known as the Paulines (not to be confused with the Paulists) and, as per the example of their order's namesake, their mission is worldwide evangelization utilizing all the communication tools available to modern man. As such, they are a major, multingual publishing and multimedia ministry. Chances are some of your Catholic books were published by them here on Staten Island. Their main building is this renowned structure, redolent of an alien mother ship, which was built in 1968, whether for the Paulines or some other purpose (Lex Luther's headquarters?), I do not know: 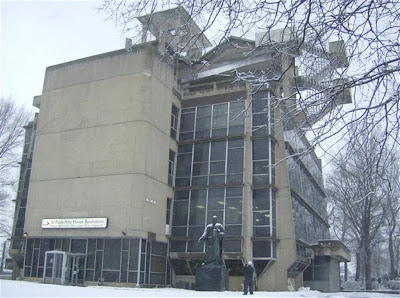 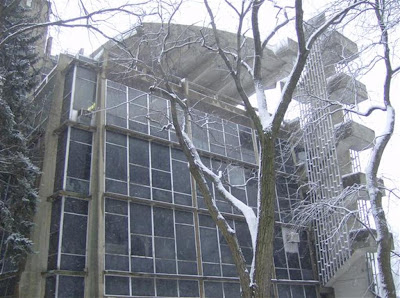 This building houses an excellent book store on the first floor, where you can see the priests and lay workers preparing shipments in an adjacent room. I assume the other floor are devoted to storage and office space, but I can't say for sure. I went to a Lenten retreat here once, and can tell you that there is a well-appointed room on one of the upper floors for Mass or other gatherings. Other than that, I don't know. However, it does look like a really cool place to explore, especially the rooftop.

I don't know when the Paulines came to SI, but I assume it was some time before this modernist structure was built, since there is an older building in the rear which seems to be the priests' residence: 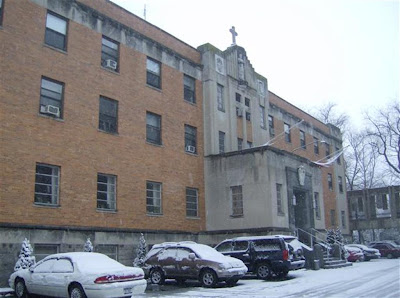 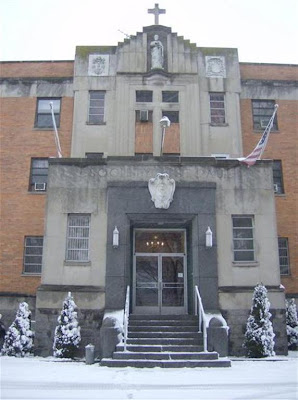 The residence is connected to the space ship by an elevated covered bridge: 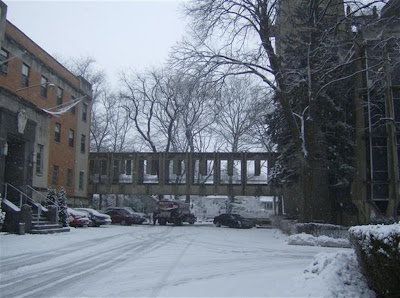 Until recently, this imposing statue of St. Paul stood outside the convent/bookstore of the Daughters of St. Paul (a sister order) in the neighborhood of St. George. The lovely sisters had to move away because of dwindling numbers, so now their property is going to be used to house mentally handicapped people for the city, I believe. 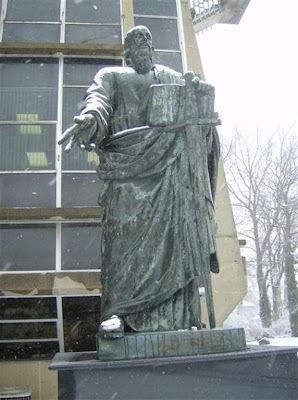 There is another building on the grounds which looks like it was once used as a schoolhouse. 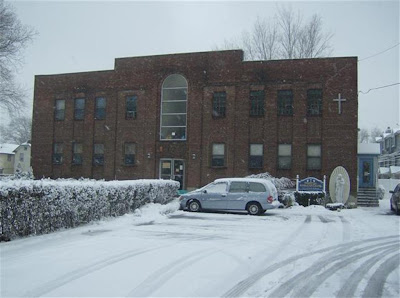 I don't know what it is mainly used for these days, but one section of the building contains a small chapel where Perpetual Adoration is held. You'll have to visit the place to see what it looks like inside, because I wasn't about to take pictures while people were praying. 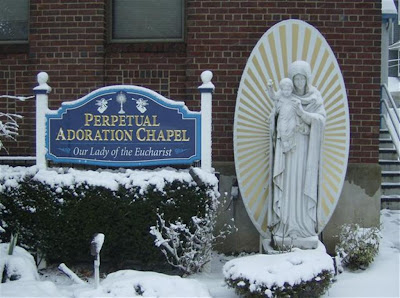 There is also a beautiful little shrine here, which seems to be a very popular place for people to come pray and light a candle. 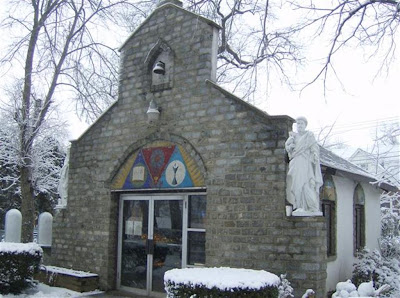 A detail of the shrine- statue of St. Peter: 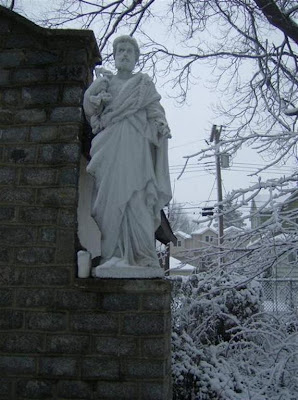 A courtyard of holy statues: 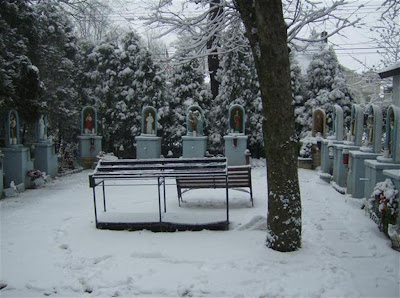 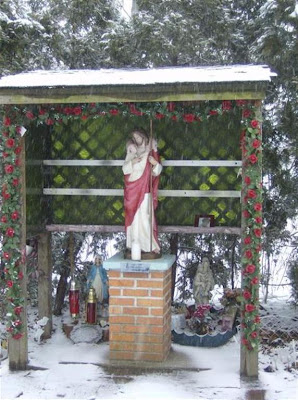 Our Lady of Fatima: 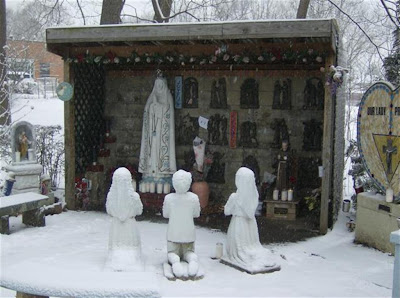 The Cross, surrounded by the Stations: 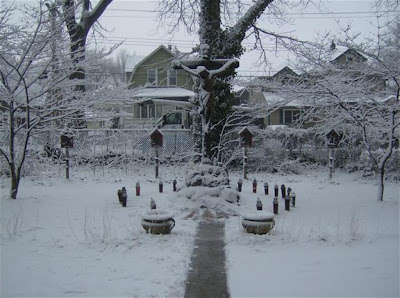 If anyone can contribute additional information about Alba House, please leave a comment.
Posted by Staten Pilgrim at 11:08 AM

All of these buildings are very beautiful. God bless the Pauline Family.

I was a member of the Society of St Paul from 1969-1977, and lived in the SI community for four of those years.
This is a congregation of priests and brothers that came to the USA in the 1930s. . The smaller building used to house the chapel, convent and postulants dormitory. The newest building was erected in 1968, and housed the printing plant (when they used presses and linotype machines) which were previously in the basement of the residence building. The roof was designed as an outdoor chapel. The main chapel was moved to this building in 1971 ( I helped lay the carpet).
The residrnce building had the kitchen, dining room, laundry, a small chapel, offices, community TV rooms and members' bedrooms. The older section behind it had some offices and classrooms.

Thanks for your memories. I'd love to find out about the architect of the building.

It's a very nice place ....peaceful u can pry and no one will bother you. ...but the one thing I hate is when I put a candle out and pry ...there a lady that comes by and moves the candles around .I don't think she should do that ...so if any see this lady please tell her don't move the candles thank you

It's a very nice place ....peaceful u can pry and no one will bother you. ...but the one thing I hate is when I put a candle out and pray ...there a lady that comes by and moves the candles around .I don't think she should do that ...so if anyone see this lady please tell her don't move the candles thank you

It's my favorite place to pray! You did a wonderful job describing it. I love the shrine, the outdoor statues, the adoration chapel. Did you mention the stations of the cross plaques? I go there several times a week during Lent to pray at each station.

As Deacon mentioned the building that looked like a school was indeed a school and part of it is still empty, however, part of it is now a residence for a woman who works for them. I know this as I stay at the monastery usually once a year as I do not live in New York..

Do you know what we can do to get a Latin mass on SI?

Love this place. Like to come here, feel at peace. Haven't been here because of Covid, but will be coming soon!

There was a fire at the outdoor chapel and they are trying to restore it. If anyone would like to donate to the restoration, please send your donation to:
Society of St. Paul
2187 Victory Blvd
Staten Island, NY 10314

They will appreciate any help they can get. Thank You We would all like to see it restored to its great beauty and serenity. 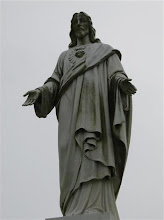 Staten Pilgrim
I am a Catholic who is concerned about the state of the Church and would like to relate my experiences as seen from my local pew in Staten Island, NY.